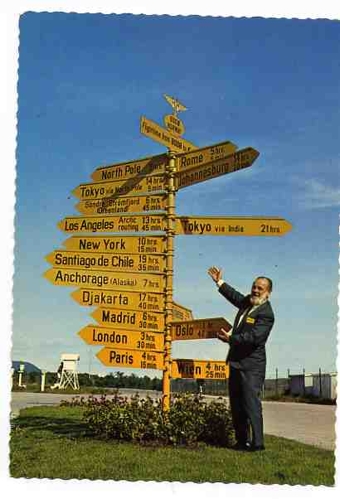 i'm going to Norway.  You can get anywhere from there! 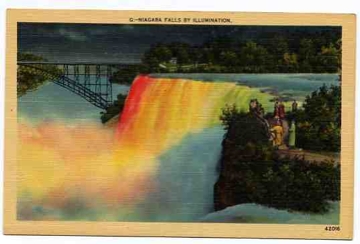 i was here a year ago.  The color illumination doesn't really look this good.  The card says "The effect is described as one suggesting that both the Sun and the Aurora Borealis have combined to do their utmost in the creation of a new spectacle".  Since i've never witnessed that, i really can't say.

What To Do At Millennicon

Another Millennicon has passed.  This was their 19th science fiction convention, sponsored by Miami Valley Fandom For Literacy.  Of course you can do the usual fannish things; panels, costumes, food, filk, but here are calm activites for young and old: 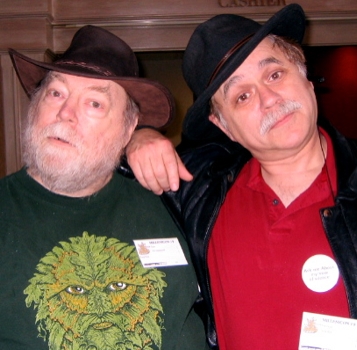 Hang out with your hat-wearing buds (also see previous post). Or, perhaps your friends will pay Klingons to arrest and jail you, and then your so-called friends will force you to kiss a dalek.

You pays your money; you takes your chances.

Is anyone else disturbed by that bizarre Carnival Cruise commercial using Iggy Pop's "Lust for Life"? Apparently so, as this neat cartoon will attest.  i always sing, "WITH the LIQUOR and DRUGS!" over that stupid ad.  Iggy definitely has got a right (heh, heh), but i think/hope he knows we're cracking up over Carnival's tastelessness.  Thanks to Discordian Research Technology for the word! 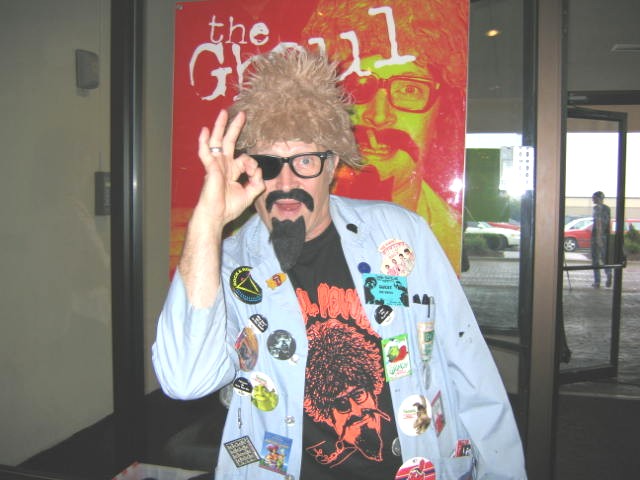 Last weekend i went to Cleveland with my friend Took Gallagher to vend at the Cinema Wasteland Movie & Memorabilia Expo, and we had a blast! It's an extremely fun and friendly show scheduled twice a year in April and October, for hardcore fans of classic and independent horror films. Each show is themed; last weekend was a Last House On The Left reunion. Some other guests were Marilyn Chambers, Lynn Lowry, Jeff Lieberman, Tom Sullivan (the halls were filled with healthy appearing people sporting gruesome head wounds), Alex Vincent, Basil Gogos, and The Horror Host Underground. The Ghoul, A. Ghastlee Ghoul, Baron Von Wolfstein, Count Gore De Vol, The Bone Jangler and Nocturna, and Dr. Creep are just a few of the characters we got to see. i was on cloud nine with the Ghoul!

There were movie screenings and premieres into the early hours, and fun parties and a 'Talent-Less Show', which Bobo won with his excellent banjo rendition of "I Wanna Be Sedated". We were seated next to the producer, director and stars of the forthcoming movie "Chainsaw Sally". This is one movie i'm really looking forward to, since the fun its creators had making it is infectious.

Check out the photo album for Took's photos. We will be back next year! 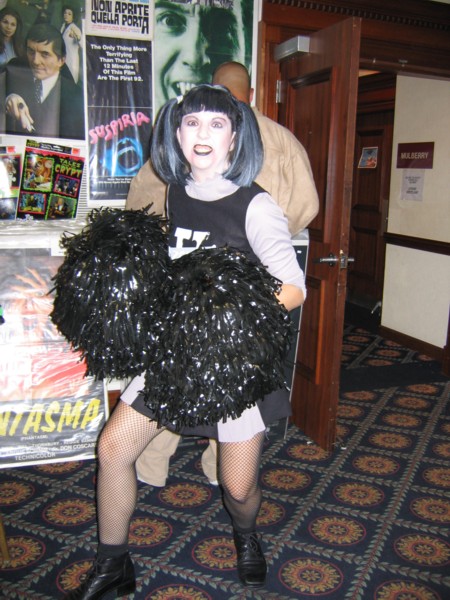 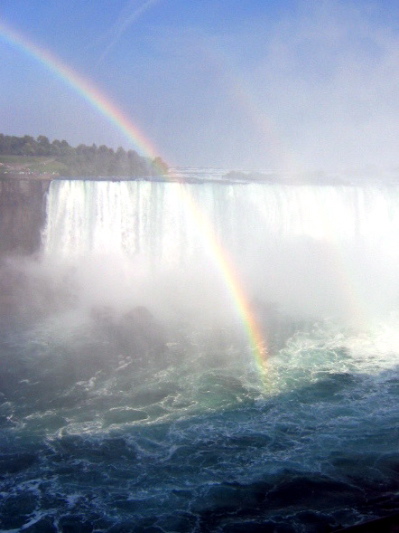 i felt like the last person in North America who hadn't seen the Falls, until my husband dragged me, our friend and the trailer there last Thursday. It was pretty cool, except the food was pretty lame. Fortunately the trailer, which we camped in near Fort Erie, was packed with snacks. Our campground also had...BUNNIES!!! Jim pretended they were making him hungry, and the night we ate at the Happy Wanderer, he was bereft over not having hassenfeffer on the menu.

i'm a bit ashamed to say we didn't visit any of the tacky attractions on Clifton Hill. The whole point of the trip was that we were too broke and exhausted for WorldCon, so we kept talking ourselves out of Spiderman rides, Frankenstein mansions, and rock 'n roll wax museums. We did have fun anyway! A lot of our water viewing was near the Niagara Fallsview Casino. 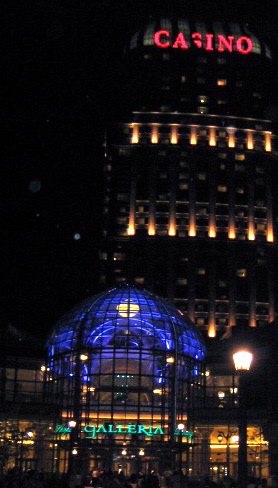 The lobby has a fountain that is a tribute to Tesla with spinning wheels, interior illumination, and wires ascending the dome. 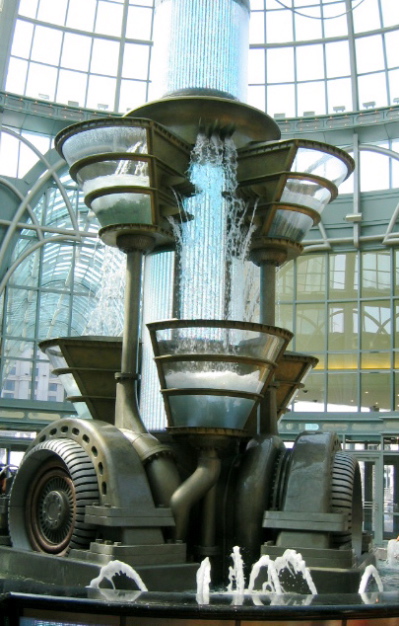 Several times each evening, they dim the lobby lights, and crank up the fountain until the tanks overflow, and lightning shoots up the dome... The First Hand Canadian Crafts and Design shop had a nice selection of Roger Wood clocks on display. And the casino buffet wasn't bad. The best meal we had was at the Venice Lighthouse, just a smidge south of our camp on Niagara Parkway. A crappy Chinese buffet we visited had really outstanding Japanese ice cream. i wanted Italian, Vietnamese or sushi, but was vetoed.

The food aside, i really enjoyed the quaintness of the town, which was jam-packed with tourists from all over the world. It was so nice i forgot about Boston, except to wonder who won the 2007 WorldCon bid, Japan, who i presupported, or Columbus, who bought our memberships. It is Japan. i'm sorry for Ohio, who would have run a fine Con, practically in our back yard, and excited for Japan. If we win the lottery, we will go! 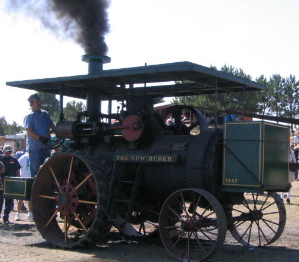 Just got back from the strangely cool Buckley Old Engine Show, held annually by the Northwest Michigan Engine Thesher Club. My husband has worked on farms and has an enduring love for threshers and such. i just like to see a large collection of the same things gathered together anyplace. Row after row of ancient tractors and threshers is oddly compelling. If it's propelled by steam, it's there. Trains, engines, mills, organs and calliopes, and a few small or old gas and oil powered engines just for variety, just about everything busily working. Milling and forging of practical objects you can take home, like bowls and bells, and ride all over the huge grounds on tractors and trains. Insanely good and fresh concession foods, and a seemingly endless flea market.

Talking with a guy in line at the best concession, we agreed that it's really tough to explain to our urban friends the allure of Buckley. If you had really exciting state fair experiences as a kid, and now, not so much, you might want to check it out. i've yet to meet anyone who has attended who isn't smitten.

With vehicle and our new trailer we picked up in Lawrence Kansas. We couldn't see much of Route 66 in the four day blur, but here's a shot of Scotty's Route 66 Bar and Grill, in Hamel, Illinois. 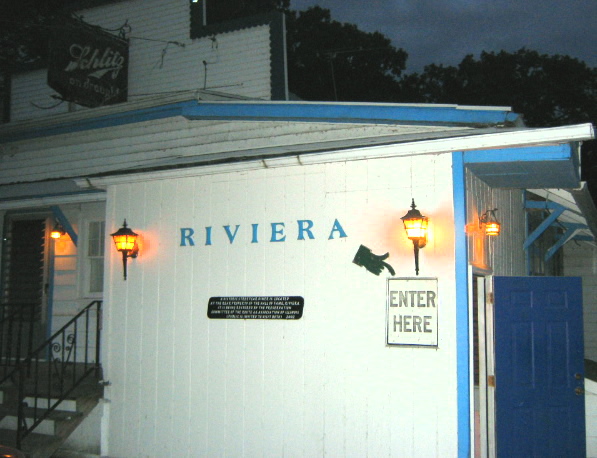 The food and service were surprisingly good. We recommend the pork cutlets with mushrooms and onions. They're restoring an old dining car out back, and Scotty has a huge collection of animatronic stuff at the bar. While he was running Hank Williams Jr., Jim actually asked him if he had the singing fish--duh! So then we got to hear both playing at once. Scotty is over 80 but says he won't retire because if he was his wife wouldn't let him hang around at a bar six days a week.

On the way back we visited Ozarkland 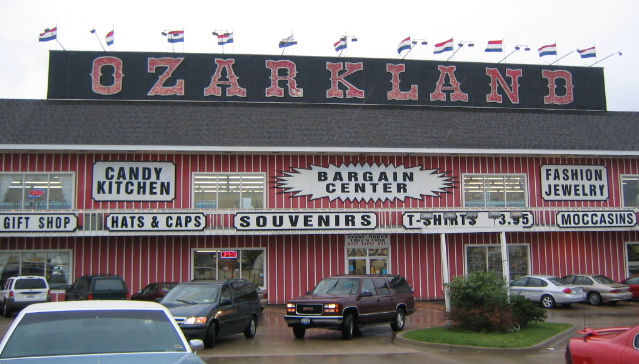 (Fireworks! Moccasins! Knives!), where they had a little hamster singing 'Kung Fu Fighting' and we remembered Scotty.

We had to be home today, so there wasn't much time to do anything but drive. i wanted to take pictures of Lawrence, but when i got there i remembered that though i really like the place, there's not much to see. My old dorm and class buildings were just too ugly to record. Here is a picture of the bland side of our new trailer 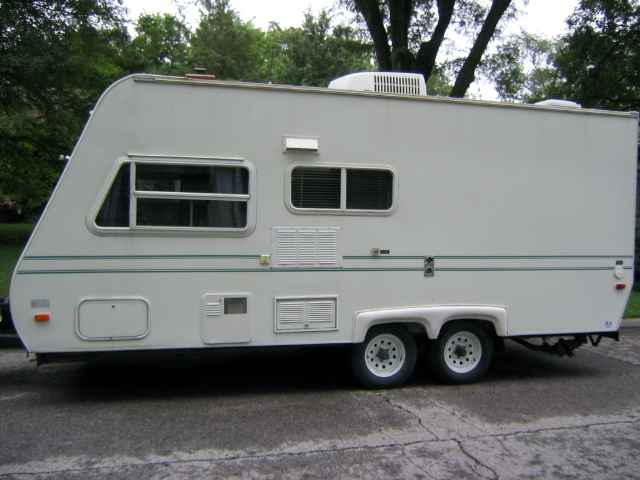 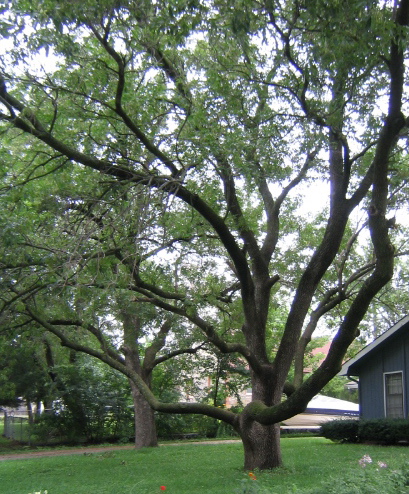 in the shady yard on Maine Street, where we picked it up. It rained all the time we were in Kansas and Missouri.

i insisted we go to Arthur Bryant's in Kansas City, but since we had the 21 foot trailer, we opted for the casino location. It was a hassle to get there but SO worth it. Don't ever miss the chance to try this barbecue. You WILL eat too much meat, and you WILL loooove it. Unless you can't or don't eat pork, forget everything else. Usually i prefer beef, and it's very good, but when you taste the pork, it's all over. On this midwest roadtrip i've eaten more pork in four days than i usually eat in several months. But the food was fantastic, and yes, i did bring back sauce and rub from Bryant's.

One more food/Route 66 note: on the old Route 66 strip in Springfield, Illinois there are many old businesses still in operation. We love corn dogs, and the Cozy Dog Drive In has the original (don't-call-it-a-corndog) cozy dog, and great fresh fries. It's also a bit of a 66 museum. We got wet a lot over the weekend, but we slept comfy and dry, and had fantastic food without ever paying more than $25 for two, including tip! If only the van was as cheap to feed!