OK, if you've never watched  All My Children, move along, there's nothing for you in this post.  But this is my little bully pulpit, and i can't let this big day pass without comment.  Eden Reigel, who played Bianca Montgomery, Erica Kane's daughter, for the past five years, has her last days on the show this week.  The parade of flashbacks today, the jet takes off tomorrow.  Because she chose not to renew her contract, Miss Reigel's character and her baby have been given a big sendoff to Paris, as befits an actress too beloved to allow immediate replacement.

The interesting thing is that Binks is getting a happily-ever-after with her girlfriend-du-jour, Maggie, played by Elizabeth Hendrickson.  Of course, Maggie wasn't her 'true' love, her deceased twin sister Frankie was.  Just when Frankie overcame her formidable personal demons and she and Bianca seemed slated for a lasting relationship, she was killed off as part of a separate storyline.  The fans howled, and rightly so.  It's great to be a lesbian, as long as you can't act on it?  AMC's writers said Frankie's character was introduced to conclude as a victim in the Vanessa/David/Leo/Greens story, and i believe it.  Problem was, Bianca has been the show's official saint for the past several years.  Every soap needs one, and Binks 2000 was the best saint AMC has had since Jenny.  These characters are one of the challenges of serial fiction.  Bianca's beatification preceded her coming out, which tied the writers' hands concerning her romantic options.

The writers listened to the fans and gave Binks an exotic new lover Lena, played by Olga Sosnovska.  Reflecting my personal tastes, i always preferred Lena's mature beauty to Frankie/Maggie.  Binks and Lena shared the moment seen above; the first daytime lesbian kiss. Before Lena was written out (contract up; ill mother in Poland trumps girlfriend's rape and pregnancy) Maggie was introduced and began a close but platonic friendship with Bianca.  After a row of trashed and even abusive hetero relationships (and her suspicious possessiveness over Bianca), Maggie is boarding the jet to Binksville.  i'd have preferred stories that dealt with Maggie's wavering (sometimes it's called bisexuality, not confusion) or a real soapy love triangle, but i know that's asking too much too soon.  Daytime will handle gayness tenderly for a while before it gets even melodramatically real.  At least this is a nice sendoff for a fine actress, and a chance for script improvements when Bianca inevitably returns. 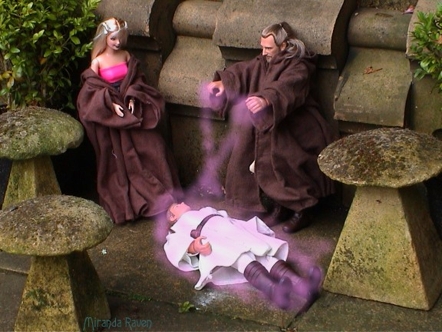 Twisted Toyfare Theatre is my favorite Toyfare feature. i have tons of action figures and hope to one day shoot my own dioramas.  (So many projects, so little time.)  So i like to see a lovingly crafted story like Inanna in the Underworld. Such fun (mildly kinky content)!  While visiting, check out the rest of Miranda Raven's Crystal Chamber, a thoughtful, artistic, tasteful goth/TS site with a difference. Addendum 2/9/2005 Yes, sadly, the wonderful Inanna page is down. It might appear the whole Miranda site is gone, but if you follow the Crystal Chamber link above to the page it selects, you can still find the rest of her site. Thanks, RideFlame, for the headsup.