Rachel Bevilacqua's Blog reports that the Judge in her custody case has granted a two hour supervised visit with her son, with more visits to be arranged if he sees the visit has no ill effects on the child.  Perhaps with sustained attention from the internet and continued donations to her legal fund, there will be a mutually satisfactory future for both biological parents.

Give It Up For Connie's #1 Handmaiden and Conbo!!!

i'm going to try to keep this light, but, really, it isn't.  Rev. Mary Magdalen, conspiracy name Rachel Bevilacqua, has been engaged in a nine year custody fiasco with her son's father, culminating in this incredibly unfair turn of events.  Some readers of this blog may be unfamiliar with The Church of the SubGenius, if, for example you don't pay much attention to banners and blogrolls. If you're not a SubGenius, perhaps the concept of X-Day might be hard to grasp, and you might not comprehend why, 1.) attendance at X-Day might shock a Roman Catholic judge, and 2.) why Rachel and her husband's membership in the Church and its participation in its events is in no way a sign of unfit parenting. But, lets be clear, this judge's custody decisions are based solely on Rachel and Steve's high profiles in the Church.  As Rev. Stang points out, if we can't get this judgement overturned, any woman who has ever been to X-Day could lose custody of her children.

Over the past several years i've seen and spoken with Rev. Magdalen at X-Days and Devivals, and wasn't even aware she had a child, which speaks to the fact that her son Kohl has been kept well apart from the more adult aspects of SubGenius life.  She is a person of uncommon sweetness, charm and self possession, which is shown by the amount of strength it takes to keep your convictions while living through a parent's worst nightmare.  Rev. Ivan Stang has a blog entry on just how much SubGenii owe to Magdalen and Jesus here, and the official Church account of the case and legal donation site has detailed information on why money is desperately needed to see justice is served.

Praise "Bob", we're seeing some tax refunds this year, and i'm grateful to help a little, when so often lately we have to sit idle due to lack of funds.  i'm urging you to go to the links, read, and donate (scroll down). Then, take a look at Jesus' General's take on the subject.

Thanks to Rev. Michael and modemac at the High Weirdness Project for mucho info.
Let's not let the pinks win this round! 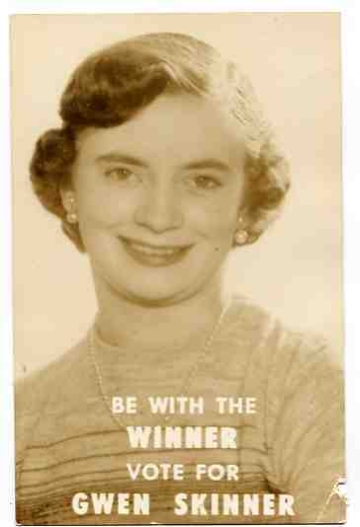 No date for this election is known, as the card is not stamped or postmarked, but the election was in Detroit or Ferndale. 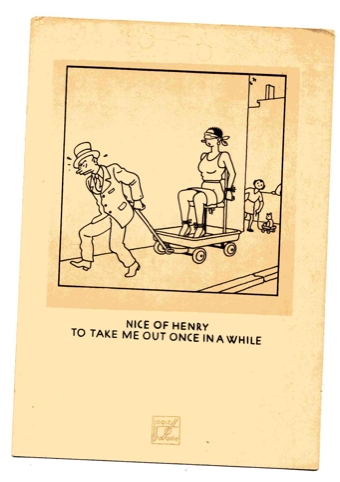 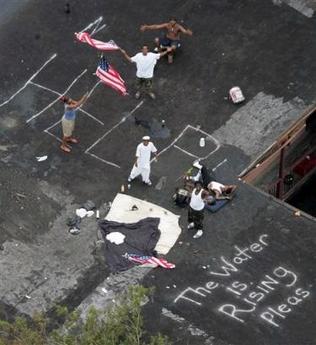 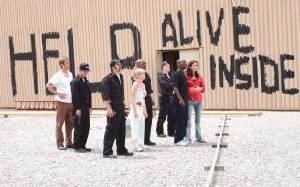 Lions and Half-Lions In the News

It's about a month too soon to start making a BFD about being a Leo, but i can't resist a good animal rescue story any time of year.  You may have heard about it - three lions interrupted seven men beating a 12-year-old girl they had abducted to force into marriage.  i chose Jason Miller's piece as the first link on this subject because he points out :

The United Nations estimates that over 70% of Ethiopian marriages are the result of the abduction and beating method, still widely practiced in the rural areas.

Seventy percent.  Just in case you might feel like your life sucks today, consider that you could have been born an Ethiopian girl.

A more fun, or at least not so sad, aspect of this story is looking at how papers and websites around the world spun this pretty bare bones AP/AFP story.  the BBC gave its usual comprehensive all, including pictures (though none exist of the actual lions, who cheezedit when the cops showed).  Adopting a more skeptical tone than other sources, they included a quote from a game hunter who speculated that the lions were just about to eat her.  Um, dude, a 12-year-old who's been kidnapped and held for a week and badly beaten isn't much of a challenge.  If they took her from the men for food, she would have been just that.  Instead, they guarded her for at least half a day, according to the Hindustan Times, which is as usually as credulous as the BBC is prosaic.  Mexico's El Diario has a well rounded piece with a little info on Ethiopian lions.  The Quiet Woman at HalifaxLive has a good opinion piece here.

And then Mike Rudas emailed me the 10 ft. liger story.  You may know that there really are ligers.  Maybe you knew they have skills in magic. But did you know they are HUGE?  If you're sick of lions, ligers, and me, perhaps you should check out the Anti-Liger Alliance.  Peace out.


A nice interview with Patti Smith on Meltdown, and her influences can be found here.  John Cale is discussed! 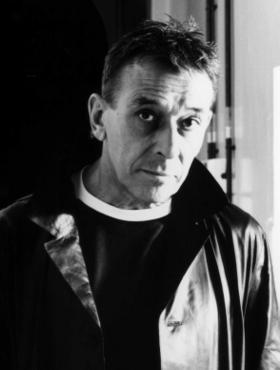 Once again, Susie Bright nails it with Romances and Raincoats, her account of the Romantic Times convention.

Because Romances are written so tightly to genre, and the predictability factor is so important to their buyers, they can’t overhaul their image that much. The explicitness of the sex scenes is the only wiggle room they have. Now that every sexual taboo has been broken, they’re a little anxious, because if they add any note of realism or literary feeling, they won’t be “romances” anymore, and the genre will crack. It already has.

The 'cracking' of the genre has interested me for a while, because as a result, there has been an explosion of hybrid romance, straddling mystery, military, science and fantasy fictions in a new way.  i go to a lot of science fiction conventions, and meet many writers doing romance and SF.

A terrific post, though i have a few quibbles.  First, i think i might get why Laurell K. Hamilton is not encouraging her readers to experiment as freely as Anita Blake, and seems so overprotective.  Many women dip a toe into the kink scene looking for romance as well as orgasms.  When this happens, the potential for serious physical and psychological harm is raised.  i'm not saying that BDSM isn't worth the risk (i would never say that), but when introduced in romance or vampire fantasy mysteries, the reader has insufficient tools to gauge risks.  An aroused reader might conclude that soliciting a rape fantasy with a stranger or recent acquaintance is too risky, but bondage isn't.  Well, maybe.  Maybe not.  How about suspension?  Breath control?  Add the dynamics of D/s (fundamentally a romantic endeavor) and the need to control or comply can overwhelm caution.  A person who in daily life is fairly good at risk avoidance may not be so when emulating fictional characters.  In this specific, i think romance novels differ from porn videos, though there's a lot to learn from the comparison Susie makes.  She makes some remarks on the differences herself in the comments.  If you talk to folks at a fetish party about how they sought out the scene, a large number of males and a larger number of females say Story of O or The Sleeping Beauty Books or those awful Gor novels were catalysts.  i find Hamilton's recent work dull, and liked Anita more when she was uptight, casually dressed, and Catholic. But perhaps she may be trying to look out for her more tender readers, knowing that the intrepid will not be deterred.  Of course, i wasn't there, didn't hear what LKH said, and wished i could see the corseted bodyguards!

The other thing is romance vs. erotica.  Of course if you write finely crafted erotica you will feel more creatively satisfied.  But most of the romance writers i've spoken with are trying to earn a living - a tough job in any niche today.  They struggle to stay true enough to form to be rehired, yet push the envelope enough to keep things interesting for themselves and their readers. 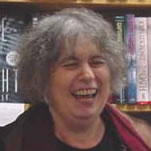 First off, i try not to be just a blog pointing to the same bloggers, even if it means refraining from posting at all.  But Susie Bright has once again nailed it about  Andrea's tumultuous life and death.  The thing i most love about her piece is how she takes down many of Dworkin's critiques while not denying her props for her influence and inspiration.  Other links of interest might be the Wikipedia entry, and several Guardian articles, particularly this one.

Though a little younger than Andrea, i'm older than Susie, and definitely a survivor of an age when feminism was battled in the streets.  There's an utopian aspect to old-time activism which leads to the kinds of premises Dworkin was working from - the idea that a visionary approach to law and policy can create some kind of unprecedented 'equality'.  It seems to me to be a flawed premise, reaching its nadir with the Dworkin/McKinnon law.  Of course, by the 1980's i felt pretty poorly represented by feminism anyway.  An out kinky/bisexual/female was befriended by no 70's politico who didn't want a piece!

In the blizzard of blog comments i've seen in the past few days, someone accused her of overlooking D/s and power issues between genders, but i think that's unfair.  She certainly observed them, but dismissed them as irrelevant because she believed those dynamics were the product of the patriarchy. She may have been wrong about many things, but in her passing she deserves to be noted as a trailblazer who tried in her own brilliant-but-broken way to speak truth to power.

Stories From The First Ladies Of Wrestling

Took wrote me today about a documentary by Ruth Leitman, Lipstick and Dynamite:The First Ladies of Wrestling. i'm dying to see it, as it stars Moolah, Mae Young, Gladys Gillem, Ida Mae Martinez, Penny Banner, and Ella Waldek (who did roller derby as well as wrestling!). i'm looking forward to great vintage footage, and the life stories of some really amazing women. Check out the website, where you can sign up for updates on the film's broader release, download cool wallpaper and icons, and read the wrestlers' blog entries!  The links are great as well. Thanks, Took!