Since i'm unemployed, i really should be getting up in the morning and watching Regis and Kelly. Years ago it was a goofy guilty pleasure, and i miss stuff like this, courtesy of the New York Basque Club, the oldest Basque club in the U.S..

Time to chill with some awesome music from The Kelly Family singing Agur Jaunak, one of the most famous and beloved Basque songs. You can also hear a very traditional version of this song on Alan Lomax's The Spanish Recordings: Basque country -- Biscay and Guipuzcoa

Check out some of the other vids from the same concert - especially Proud Mary. Look at the ginormous crowd, i think in Vienna before a crowd of 250,000. Hear those hairy, wild German/Irish/French/Basque/American hippies throw down. Like punk never happened. Just a smile. 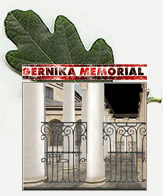 If you ever happen to visit Gernika, you can see little oak tiles with arrows placed in the stone walkways.  They point the way to the location of the Gernikako Arbola, the Tree which symbolizes the traditional freedoms, culture and government of the Basque people. In the middle ages, and probably much further back, Basque villages would hold assemblies under the biggest or oldest local tree.  In 1512 the great oak in Gernika became the location of Basque regional assembly. There has been more than one Tree of continuous lineage, but the fact that Basques protected the Gernikako Arbola with an armed guard during the bombing of Gernika in the Spanish Civil War is an indication of just how much the Tree, and Gernika, means to the Basque people.

Check out this awesome, informative look back at Gernika before, during and after the bombs.  A day-by-day military infographic,  memories of a Basque soldier (not in English, but a great video), a man exiled as a child to Belgium, sings a Basque song from his exile, and a virtual walkthrough of Gernika, then and now (nasty IE plugin required), which takes you to the Tree.  The infographic is particularly fine, i hope eitb keeps this on their site for a while.

My brother received holiday greetings this week from our relation who works for Euskal Irrati Telebista, the public television and radio for the Basque Country.  Included was this link to the cutest seasonal spot i've seen this year.  It doesn't seem like any images from it have been tagged yet, so trust me and go to the website, preferably with your sound on.  Zorionak eta Urte Berri On!

This is very good news for Basques, and human rights activists worldwide.  Even better news if the Spanish and French governments begin dealing justly with the Basque people.

Good overviews of the Basque conflict, and what the cease fire might mean, at the Christian Science Monitor, and Bloomberg.com.

Chocolate vs. Candy, Art vs. Craft, and Torture by Surrealism

Last week, it seemed life had taken on some kind of a theme.  At first it was chocolate.  i finished Mort Rosenblum's curious and charming Chocolate: A Bittersweet Saga of Dark and Light, went to Trader Joe's and replenished my supplies of 71%+ chocolates, and on Sunday we saw Charlie and the Chocolate Factory, which was surprisingly good. Seeing all Tim Burton movies is one of my few rules, but that doesn't mean i was expecting a lot.  Of course, Willy Wonka is about candy not really chocolate, and it's pretty easy to see the distinction in the chocolate world.  Candy: undemanding, plentiful, sweet.  Chocolate: challenging, scarce, druggy.  Both good, but different.

But somewhere this week things switched back to the ongoing concerns of art... and crafts, and commerce, and what is or isn't any of those things, and why.  Trying to collect and assemble the next round of jewelry, folk art and comic book pages to put on eBay to raise some cash, trying to figure out what i can produce myself that would be profitable on eBay without feeling like i'm selling my soul...same old shit.  A flood of mediocre to bad lampwork has wrecked beaded jewelry sales, outsider art has turned into a sales pitch empty of all meaning, and i just can't get behind a fad like ACEOs. i can sell what i make, but on eBay, not so much.

Francine and i went to the Ann Arbor Art Fairs yesterday, held, as always, during some of Michigan's most miserable weather. A long time ago, and for many years, i went through the whole thing and at least looked into every booth.  Now we map out the two or three must-see artists (like Valerie Hector, who is always an inspiration), and stop at anything new or familiar that looks interesting, but most of the stuff doesn't even slow us down. Going to the Art Fair is an excuse for visiting A2 that doesn't involve Zingerman's.  The highlights of my visit were bubble tea and getting stickers and a nifty pencil case at Wizzywig. The dedication of the artists at the fair is undeniable, but so much was just polished art product, evoking little but some half-assed whimsy. It's working for some people, but i couldn't emulate it to save my life. Some kind of art, not mine.

It's hard to defend drawing a line between 'art' and 'craft', or art/not art, and people who do just seem too lazy to address why they don't like a work or artist.  Why can't  they say something is bad art, rather than denying something they can't even describe?  At least that's an opinion.  One time a guy picked a fight with me because, i swear to "Bob", he claimed the Ramones' music wasn't  rock and roll.  (Why i became the champion of the bar for the Ramones or punk is obscure to me, it's not like i was dressed for the part or something.)  But that's always reminded me of the art fights in school and through the years in galleries and co-ops - is it art or craft/ illustrtation/ not art? If i make the thing, or perform the piece, or whatever, don't I get to say if it is or isn't art?  Then you get to say it sucks or rules or whatever, according to your taste.

Which leads me to Nenslo's  Art... Or Torture? post, which was the thing i needed to read today.  Beginning with Spanish anarchists using modern art to torture fascists, it's a great essay on defining art and who gets to do it.  Check it out at the link above or at Nenslopalooza, where there are also some bad blog examples even more rambling and incoherent than this one, thus enabling me to publish this post rather than erase it.