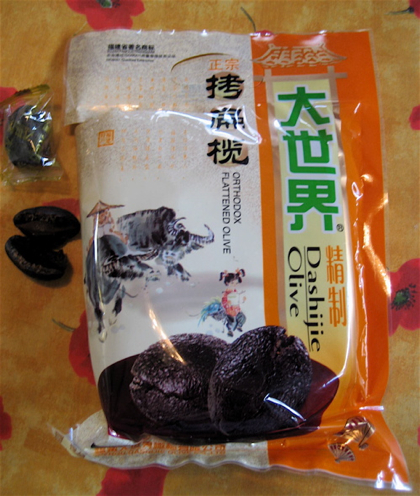 i'm always trying new snacks at the Asian groceries, and this one was so strange we couldn't resist.  It's difficult to tell exactly what the Chinese manufacturers meant by 'orthodox' olives, but we're guessing they are the black ones, because there was also a light green variety which must be UNorthodox or reform, since no specification is made.

The neat thing about this item is that the makers began with a dubious concept - a sort of candied ripe olive - and meticulously followed through until an authentically bizarre, but somehow tasty, result was achieved.  The Fuzhou Dashijie Olive website shows a selection of preserved fruits and drinks, including several types of plums and olives.

The ingredients: fresh olive, sugar, salt, licorice root, fennel, clove, sodium benzoate, potassium sorbate, and radish red. The presence of licorice and fennel with a strong olive flavor makes sense, it's a classic flavor combo found in Spanish tortas de aceite.  Individually wrapped, the 'olives' have a slightly dry and wrinkled skin and an actual pit in the center, for authenticity.  As you can see from the opened one in the second picture, even when unwrapped and split they look like the real thing, individually wrapped and measuring about an inch in length.  The flavor is strongly of olives, but very sweet, with the licorice notes both kicking the sweetness up a notch, and smoothing it into a more refined herbal flavor, more like a sweet than a candy.  The texture is as if you took a very large, lightly brined ripe olive and left it out in a dry room for several hours, as it moves toward leathery.  If you really love olives, this is well worth a try at $3.69 for a big bag of more than a dozen olives.  i plan to check out the green olive version, and try seeking out this brand of preserved plum as well. 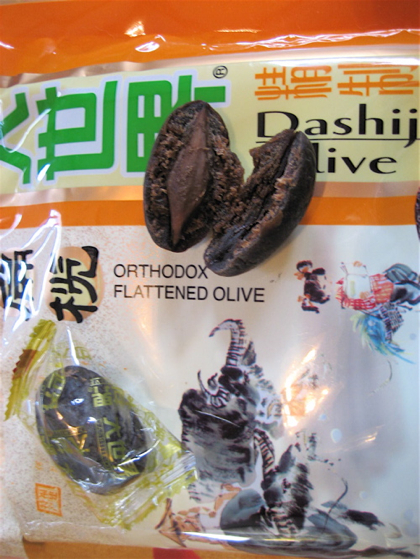 My best friend moved to Taiwan over 5 years ago, and on two separate occasions he presented me with authentic Taiwanese "Green Bean Cakes"...

To say that I'm willing to relocate there JUST for these things isn't hyperbole.

I'm not sure if you've had them, but for anyone who hasn't, they have a very singular texture; like they're made of the finest grains of sand, and moistened just enough to form into shapes.

Handle one with less than a dainty touch and it crumbles into a fine powder in your fingers.

However, a gentle touch rewards you with a taste that lingers with a touch of a deeper flavor just at the tip of your tongue.

The center of the cookie has some kind of nut-paste (I think). It looks and tastes like a thin slice of fine chocolate at the heart of the cookie, but I don't think that's what it is.

And so as to not leave your eyes lacking... they are shaped into delicately detailed coin shapes, with characters and symbols atop each one. Circles, squares, hexagons... beveled, squared, rounded... yet all in that peaceful, serene pea green color.

Mmmm. i have several Asian groceries in the hood, and i think i might have seen these. i'll look for them next time i shop. Just about every green cake, cracker or cookie gets a glance from me because i have a thing about green tea flavor snacks. Some of those have that super light, crumbly texture as well.