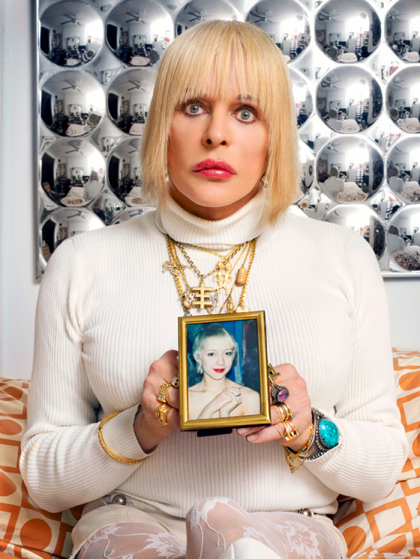 The Wild Hunt points us to Technoccult, pointing to this excellent Radar story on the ongoing pandrogenous relationship between Genesis P-Orridge and the late Lady Jaye Breyer.  An epic tale of identity, destiny, magick, music and kink, the Radar piece by Aaron Gell is also in the current newsstand issue.

And in other Gen news, this from Billboard.com:

But it wasn't before the band's classic '80s lineup, along with the assistance of various members of opening act Paul Green's School of Rock All-Stars, delivered a scorching set of nuggets from their Alternative Tentacles and Touch & Go heyday on the final night of a 14-date summer reunion tour.

Throughout the set, which included performances of such college radio staples as "Cowboy Bob," "Cherub," "Moving to Florida" and the demented Black Sabbath send-up "Sweet Loaf," Haynes kept motioning to the soundman to turn up his monitor mix. Growing increasingly agitated towards the second half of the 90-minute gig, Haynes walked over to the soundboard on the side of the stage to confront the soundman, which ended in a confrontational high-five and Haynes walking back to the microphone smiling.

However, when his monitor began feeding back, Haynes flipped the soundman his middle finger. When the soundman returned the gesture, Haynes darted back over to him and pegged him with the beer bottle from which he was drinking.

Without hesitation, two security guards grabbed Haynes and escorted him off the stage in the middle of "I Saw An X-Ray of a Girl Passing Gas." Guitarist Paul Leary took over the lead vocal duties for the last song of the night, a defiant, caustic rendition of "The Shah Sleeps In Lee Harvey's Grave," before leaving the stage to a wild chorus of cheers and debris being tossed on stage.

The cheers quickly turned into a raucous cacophony of boos and united chants of "Gibby" when the house lights were turned on and the realization that no encore was to take place hit home with the drunken, rowdy crowd.

In an effort to try to keep the peace, Genesis P-Orridge, the frontman/woman of industrial rock pioneers Throbbing Gristle, took the stage to quiet things down. But he/she was also escorted off the stage by security.

At deadline, it was unclear whether Haynes was arrested or simply ejected from the venue without police intervention.