From The Hurting comes Dr. Doom's Mailbag, where he opines on why Stephen Strange lacks a regular book:

In your long career as a super-villain, you've encountered Doctor Strange many times. Why do you suppose that, despite his unbelievable coolness, Doctor Strange is chronically unable to support a solo series? I'll bet it's because his origin needs to be updated to bring it more in line with something you'd see in a derivative action movie.


Bah! Stephen Strange succeeded to his role as the Sorcerer Supreme of the Earth dimension only through luck and guile. Any fool could be Sorcerer Supreme with access to the library of mystical tomes and artifacts that the Ancient One possessed. But was Strange's mother an incredibly powerful Gypsy sorceress who was able to pass her great acumen to her only son? Was Strange able to complete his mystical training without access to the greatest forbidden libraries on the planet, instead relying only on his own peerless instincts to guide him through the perilous realms of outer experience? No, Strange had a wrinkled old man to hold his hand. Squirrel Girl could have a decent go at becoming Sorceress Supreme if she had the Eye of Agmotto and the Book of the Vishanti at her ready disposal.

Surely the reasons for Strange's perpetual inability to hold down a solo title are easily explained: the readers know better. They would much rather read the monthly adventures of Doom, and until they receive this they are choosing to boycott any faux Sorcerer Supreme titles. But soon, once his plans come to fruition, Doom shall assume his rightful mantle as the mystical master of this world, and all shall bow before him. It is only a matter of time.

And as for origins being changed to more reflect the whims of Hollywood, Doom shall note that almost every significant retcon of the past two decades has been eventually reversed. Do you recall when it was strongly implied that Doom was actually half-brother to the hated Reed Richards? No? Well, neither does anyone else. In another six months, Strange's new origin will be as fondly - and as frequently - remembered as Highlander 2.

There are more amusing Doom proclamations to be found... a worthy followup to The Last Temptation of Steve Ditko. 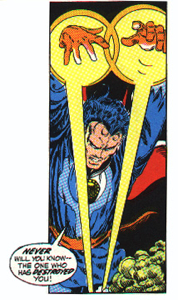